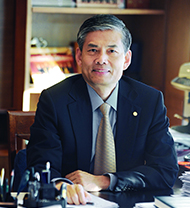 China Taiping Insurance Group Ltd. is a Chinese state-owned financial and insurance group whose management headquarters is located in Hong Kong. As a significant representative of China’s reform and opening up in the insurance industry, China Taiping boasts the most extensive network of overseas institutions among China’s insurance industry, remarking itself one of the financial insurance groups with the most comprehensive business lines. For quite a long time, China Taiping has adhered to the international standards and continuously strengthened its capacity of professional operation. It has also actively strived to establish a cross-border integrated management model featured by “shared resources, cross-border flow of qualified personnel, unified expanding of clients and global access to services”, to provide one-stop integrated financial and insurance services for overseas clients.

Since 2012, China Taiping has firmly grasped the important development opportunities emerged after being listed as a state-owned enterprise and carried out the strategy of “Establishing a new Taiping in three years”. By the end of 2014, China Taiping has realized the strategic development goal of “Establishing a new Taiping in three years”, doubled the total premiums, total assets and net profit, and significantly enhanced its overall strength, industry influence and brand value. In 2015, in order to adapt to the new normal of economic development, China Taiping implemented the excellent product strategy in an all-round way and built an insurance company with six distinctive features of state-owned enterprises’ responsibility, integrated finance, internationalized operations, “Head-to-Head” strategic alliances, Internet finance and “Four in One” insurance supervisory system. China Taiping has maintained the strong development momentum of “Establishing a new Taiping in three years”. Its core business has outperformed the overall market for sixth consecutive years and its quality has also remained a leading position in the industry. China Taiping was listed among the World Top 500 Brands for two consecutive years with the brand value exceeding 100 billion RMB.

Heading into a new era, China Taiping will further study and implement the spirit of the 19th National Congress of CPC, insist on pursuing a sustained growth of value, accelerate innovation-oriented development, continuously improve corporate governance, and strive to create the most outstanding insurance company with the greatest potential, so as to provide more and better integrated financial insurance services for the public!