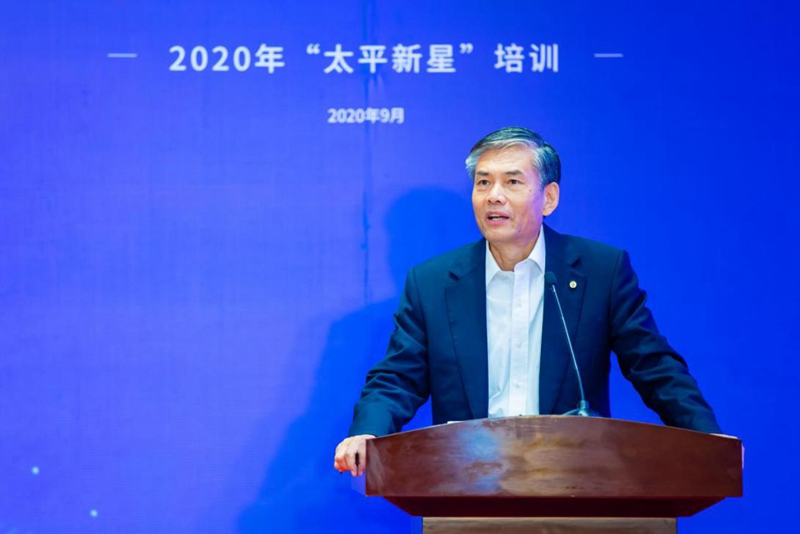 Mr. Wang pointed out that for the first time, China Taiping held new employee training programs on such a large scale, aiming to speed up the cultivation of talents, deepen development and ensure a wide talent pool for implementing the company's development strategies in the new era. Taiping's development relies on talents, especially bright young people. Taiping's high-quality development is creating greater opportunities for our employees to realize their full potential and let their dream come true. He encouraged new recruits to be passionate and responsible, and to strive to achieve potential by being willing to learn, brave enough to put into practice and honest and self-disciplined. He hoped that all of Taiping's "rising stars" would grow quickly and healthily and be able to bear heavy responsibilities.

"Taiping Rising Stars" will be divided into online courses, main courses and study events. From September 1 to September 10, students have participated in 10 different online courses such as political theory, professionalism and common workplace skills. The main courses will be carried out from September 11 to September 20 and consist of 15 courses. There will be six courses on the group's development strategy, company culture, company history, technology construction, organizational system and professional integrity; three marketing courses on life insurance, general insurance and the development of the insurance market and comparative analysis of the industry; five lectures on life insurance, property insurance, pensions and group insurance, investment, and reinsurance and overseas business; as well as one on insurance enterprise governance. At the same time, various study events such as book clubs, knowledge contests and keynote speeches will also take place. During the "Taiping Rising Stars” training program there will be 100 classes and 375 video training points simultaneously taking place across the country, with 4186 domestic and overseas students participating.

Principals from 20 subsidiaries including Taiping Life, Taiping General Insurance and Taiping Pension, as well as persons in charge of the company's relevant departments also attended the ceremony.